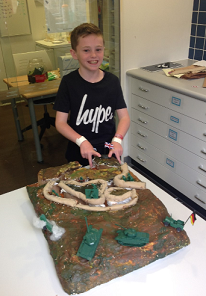 Tommy has written a non-fiction piece of writing explaining some of the things he has learnt about the war and life in the trenches. His teacher, Rachel’s think it is a fantastic piece of writing full of lots of great information linking the past to the present – and we think you will too! Read Tommy’s writing below and look the incredible art work of the trenches that he made during his admission. Well done Tommy!

When the war started all men had to prepare for battle some of the women were put to nursing in the trenches. If you could imagine the trenches were filled with water and bacteria because all the storms and mud. In some kitchens people cooked on a ‘stove’ heated it by a coal or wood fire in the olden days people didn’t have microwaves or television all they had was newspapers. In medical treatment the nurses in the trenches only treated the things they knew such as someone caught the flu only one nurse would know how to treat it. If you can compare the war to the modern days don’t you think that the people who did fight for our country deserve to not pay taxes?

In Chelsa, London there is a pensioner’s retirement that’s where people from the war whose family have passed away and don’t want to live on by them self any more. I know someone who lives in there, his name is Allan he was in WW2. Allan went into the pensioners because sadly his wife past away with cancer in 2013 Okay that’s enough of the sad bit.

Every month there is an air raid that meant the Germans would drop bombs at random English trenches to take down there food supply so on the battle field they will be starving and weak and the Germans will conquer England. But should I tell you what won us the war tanks and radar’s because the tanks were bullet proof and the radars can find the location of the German troops and there tactical move’s so they don’t get killed on the battle field.

If you were at war and you were on lookout for the night and there was a bomber coming at you and the trenches you’d have to wake up all the redgerment and take cover in a squashed little room with 64 other people that would be horrendous especially people who are claustrophobic because everyone’s bony elbows in your face I can’t even think about it.