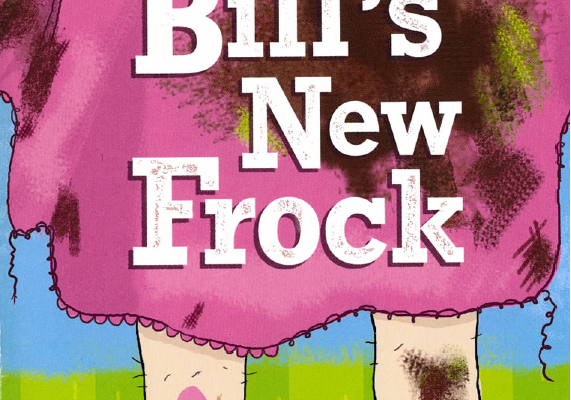 Charles, Scott and Zane read the first chapter of “Bill’s New Frock” by Anne Fine. The boys then composed a diary entry as if they were Bill himself, detailing some of the events that happened on the day that he woke up and found out that he had turned into a girl with out any warning at all!

I couldn’t believe it at first, but it was true.

The hints that gave it away was that mum gave me a pretty pink flock I was confused after, before dad went to work he kissed me on the cheek plus he called me poppet.

Besides on the way to school mean Malcolm whistled to me, because I forgot to take the long way to school. The old lady spoke “let me help you cross over the road “I explained I crossed many times but she wouldn’t listen.

I was late the head teacher was scolding everyone who was late, it was my turn to be scolded but I wasn’t, he announced “don’t want be late for assembly”, at the assembly I tried to cover my legs with my dress.

After the assembly it was about who would help carry a table, it’s always unfair! I didn’t get picked only boys did, how unfair!!!! Then in class I got a complaint for messy handwriting but Phillip’s handwriting was so bad, worse than mine.

Finally we read our class book even worse it was table 5’s turn to act out the book. I was Rapunzel and the only line I got was Oooooooh. It was so not my day!!!

Today I had a questionable morning leading into school. What happened was I was just snoring on my bed and my alarm woke me up for school. So I sat up and faced the mirror and was enabled mesmerizingly as a female. I highly disbelieved it so I thoroughly rubbed my eyes and looked back at the mirror to still find myself as a girl. I got up out of my bed and just stared at the mirror like a statue trying to solve this perplexing puzzle. Suddenly my creaky door opened and my mum entered and placed a pretty pink frock on. I gasped in shock and before I could take it off my mum instantly zipped it and disembarked saying, “I’ll leave you to do the shell buttons.”

Angry, worried, scared, I looked down at myself head in hands worrying how am i going to get through the day. As I went towards my door to go and eat breakfast my dad rushed past planting a kiss on my cheek, “Bye poppet.” So I carried on my journey downstairs and started eating my cereal, in my mind little bubbles meandered saying how are you going to walk through the streets like this. I inhaled and exhaled a deep breath and started my quest to school.

As I strutted down the road people were staring at me, mean Malcom was standing in the back street talking to his gang. I didn’t have the energy to face them so I decided to go the longer way but stupidly I past them and Malcom and his friends whistled at me making me blush. I rambunctiously barged past them keeping my head down. As I got through the gang I got to the main road and saw an old lady struggling across I offered to help her but she said “don’t worry darling I can help.” And safely got across.

As I was approaching the school gates I heard the head teacher shouting to everyone hurry up hurry up. Scared I ran to the gate and apologised hoping I did not get detention but he said “Little girl we don’t want you to be late now” Assembly was present so I placed my bag in my locker and sat down on the floor with my class. Assembly went on and rules and regulations were set for the school and excitedly the head teacher said I need some strong helpers to bring some tables to nursery. A high percentage of boys put their hands up and approximately 25% of girls put there’s up but the teacher only picked boys it wasn’t fair. Was this to come in the future?

I woke up wearing a horrific looking pink frock! I looked in the mirror and then I started to get bothered. AAAAAAHHHH! I shouted. I was pale. I was shocked. I was A GIRL!!!!! I COULD NOT BELIEVE IT! It was true. How would you feel if you were a boy at first and suddenly transformed into a girl?!

Mum burst into the room and said “I’m late for work” she walked out of the room and then dad burst in. He planted a kiss on my cheek and plus called me poppet. Next I went outside in my horrible pink dress but then I saw Mean Malcom, also known as my evil arch enemy! But instead of kicking scabs off my leg like last week he actually whistled at me like I was hot! IS THIS A NIGHTMARE? I thought to myself “maybe I should take the longer way.” So I then saw this old lady. “hello little girl “ she said. She wanted to hold my hand to cross the road. I refused but she held my wrist anyway. We walked across the road but then she noticed my ugly, terrible, horrible looking frock but she thought it looked beautiful on me .”You look beautiful today young woman, don’t mess up your frock. Your beautiful looking frock she added. I ran to school and there the headteacher was standing at the school gates watching the last few students arrive. “come on Stephen, get a move on Tom, late Andrew, but when she called me she said ”hurry up dear, you don’t want to be late for assembly do you dear ?” so we went to asembely and the headteacher picked 4 strong children to carry a table all the way to nursery and practically everyone In the hall raised their hands but worst of all he picked ALL BOYS. Not even 1 single girl. Girls are strong right?

We went back to class and first we were going to write and so we did. I grabbed my pencil and wrote. I thought it was pretty neat compared to my boy writing but Miss was not impressed. All I thought was worst day EVER! So I carried on my awful day.

Then we had to act Rapunzel and I was chosen to be long hair Rapunzel.  It was not my day.