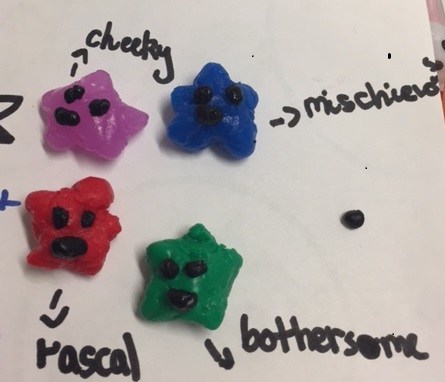 The Blobars are four creatures that look a bit like blobs and a bit like stars. They are called Cheeky, Mischievous, Bothersome and Rascal. The Blobars used to live with the stars, but the stars got rid of them because they were just too different. They were too colourful and too cheeky (they loved to play tricks on the stars).

The Blobars had nowhere to live, so they all joined together to create a purple, blue, red and green planet called Blobarnet.

Sadly, things did not improve between the stars and the Blobars. In fact it soon became a war – hundreds of billions of stars against just four Blobars. The Blobars needed help! They decided to go down to Earth on their spaceship to make friends with some humans. The first human they met was Tim Peake, as he was just setting off on his trip back to space. At first Tim was a little scared of the Blobars as he had never seen anything like them before (and they kept playing tricks on him).

However, Tim listened to their story and decided to help the Blobars. He travelled to space and told the stars (who he knew loved to be admired): ‘If you don’t stop being cruel to the Blobars, I will tell the humans back on Earth not to look at you anymore.’ The stars did not want this. They agreed to this but asked that in return the Blobars stop playing tricks on them.

Tim Peake returned to Earth and told everyone about Blobarnet and the Blobars. The sad part is that when they looked through their telescope they didn’t see anything as they didn’t believe in the Blobars enough.

Do you believe in Blobars and planet Blobarnet? Next time you are out stargazing, be careful as a Blobar might sneak up on you at any moment…