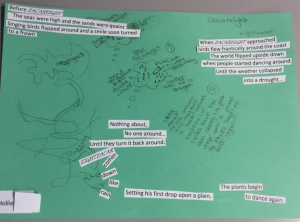 Hollie wrote this poem during a session with Philip the firepoet.

Nothing about,
No one around…
Until they turn it back around.
EIGHTZACAR comes down like rain,
Setting his first drop upon a plain.
The plants begin to dance again.