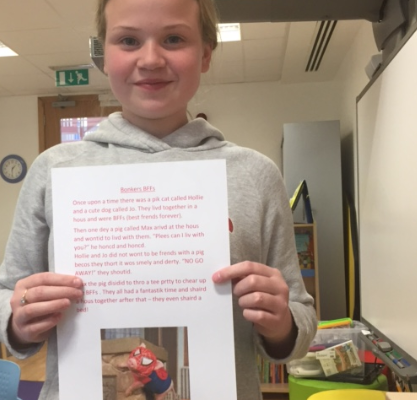 We read stories about animals with problems and resolutions in class today. Stacey then planned her own story about a cat and a dog living harmoniously together, until a pig comes along… Read Stacey’s imaginative story below. We are very proud of her progress in writing – well done Stacey!

Once upon a time there was a pik cat called Hollie and a cute dog called Jo. They livd together in a hous and were BFFs (best frends forever).

Then one dey a pig called Max arivd at the hous and wontid to livd with them. “Plees can I liv with you?” he honcd and honcd.
Hollie and Jo did not wont to be frends with a pig becos they thort it wos smely and derty. “NO GO  AWAY!” they shoutid.

Max the pig disidid to thro a tee partty to chear up the BFFs. They all had a fantastik time and shaird a hous together arfter that – they even shaird a bed!